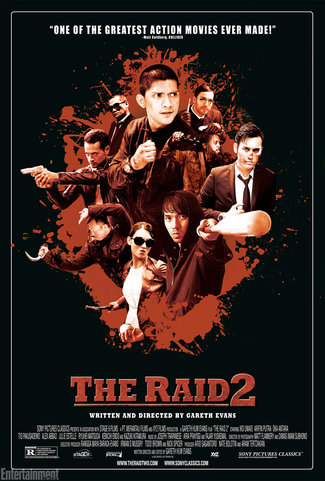 A sequel to 2011's The Raid, Indonesian martial-arts action movie The Raid 2: Berandal (meaning "Thug") was released worldwide at the end of March 2014. The film follows the main character's journey right after the end of the first movie. This was originally director Gareth Evans' dream project before budget limitations forced him to create a simpler movie. Therefore, while the first one was a small-scale Bottle Episode of a movie set over a few hours, The Raid 2 is a grand, expansive underworld opera set over several years.

After surviving the ambush at Tama's apartment, Rama (Iko Uwais) seeks protection for himself and his family from an honest police officer recommended by his outlaw brother, Andi. But his family's safety has a heavy price: his own freedom. Rama abandons his wife and son to go undercover, looking for evidence of corruption within the police force. But when the gang he infiltrate faces the threats of conspiring rivals, Rama gets caught within the conflict and has to fight his way out through the worst the underworld has to offer.

The Raid 2 contains examples of the following tropes: