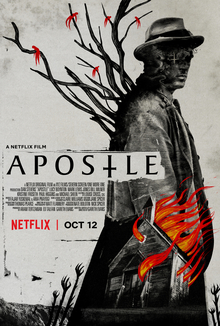 "Beware of false prophets, which come to you in sheep's clothing, but inwardly they are ravening wolves."
— Thomas Richardson, quoting Matthew 7:15, KJV
Advertisement:

Apostle is a 2018 British-American period Folk Horror film written and directed by Gareth Evans (director of The Raid and its sequel), distributed by Netflix, and starring Dan Stevens, Lucy Boynton, Mark Lewis Jones, Bill Milner, Kristine Froseth and Michael Sheen. The film has received praise for its cinematography, visuals, and performances, as well as its blending of horror genre.

In 1905, Thomas Richardson (Dan Stevens) travels to the remote Welsh island community of Erisden to rescue his beloved sister, Jennifer, after she is kidnapped by a mysterious cult demanding a ransom for her return. Though this is by no means a simple task, Thomas quickly discovers that there's more happening on the island than anyone realizes.

Not to be confused with the 1997 film The Apostle starring Robert Duvall.

This is a slow-burn horror movie with a fair few twists, so beware unmarked spoilers.