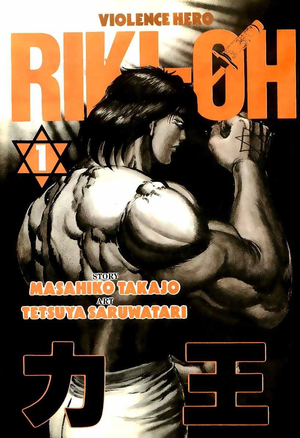 Created by Masahiko Takajo and Tetsuya Saruwatari, Riki-Oh was serialized in the magazine Business Jump from 1988 to 1990 and later published in 12 volumes. The manga (and the anime too) starts off very much like a homage to fellow martial arts anime, Fist of the North Star, however it eventually takes its own pace and voice after the first story arc.

It is in the near future - sometime in the 1990s most likely - the world sucks, to say the least. Saiga Riki-Oh is in a privatized prison where Might Makes Right. He soon becomes an enemy of the Four Emperors, four powerful prisoners made head guards, and then the mysterious warden. The first storyline ends much the same way as Riki-Oh: The Story of Ricky.

Riki-Oh begins an adventure where he tries to find his brother, and find clues towards his past for it seems as though somebody is pulling the strings. Thus Riki-Oh's journal is full of combat where the action never ends. Bodies pile up as the super power martial artist punches and kicks through armies of freaks, robots, androids, monsters, martial artists, ferocious animals, and more!