Manga / They Were Eleven 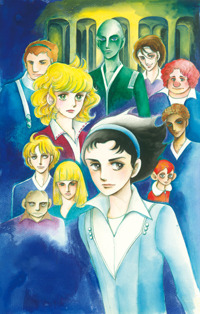 They Were Eleven is a Sci-Fi Shoujo Manga originally written by Moto Hagio and published in 1975. It received an anime adaptation in 1986.

In the far future, Earth—now known as Terra—has made contact with various other planetary civilizations. These civilizations have formulated a central school, Cosmo Academy, for the best and brightest in the universe; the entrance exam is said to be exceptionally hard, but admission to the school guarantees a position of societal influence and excessive wealth after graduation. The story follows a group of ten young space cadets on the final part of their entrance exam. The group has been ordered to board a decommissioned spaceship in orbit around a small star and survive as long as they can with what they have. They can activate an emergency beacon to signal for help, but they will most likely fail the exam by doing so.

Once the ten arrive at the decommissioned ship, they discover an eleventh member on their crew, and as the days pass, the orbit of the spaceship gradually decays, which raises the temperature of the entire ship. The eleven cadets—each from different cultures, species, and walks of life—deal with their suspicions of each other as they work to stabilize their orbit, fight off a mysterious sickness, and determine which one of them is trying to kill them all.