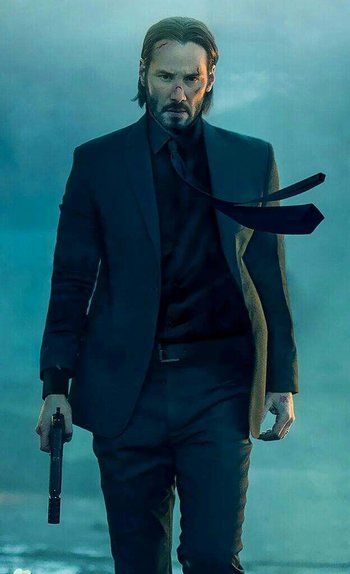 We're killing strangers so we don't kill the ones that we love.note Also, John Wick is coming over to shoot you.
"People keep asking if I'm back and I haven't really had an answer. But now, yeah, I'm thinkin' I'm back."
— John Wick
Advertisement:

John Wick is a neo noir action thriller franchise set in the shadowy underworld of assassins and criminals.

John Wick (played by Keanu Reeves) is a retired hitman who begins the story attending the funeral of his terminally ill wife. As a final memento, she arranges for John to receive a puppy to care for so he would not be alone. Unfortunately for John, less than a day later, some young Russian gangsters break into his house to steal his Cool Car, and in the process they kill the dog out of spite.

Even more unfortunately for the gangsters, the man they just crossed wasn't just any hitman, but the dreaded "Baba Yaga". So begins a Roaring Rampage of Revenge as a One-Man Army cuts a swath through the underworld of New York City. The sequels go on to explore the consequences of John coming out of retirement through globe-spanning adventures.

Like how The Fast and the Furious is known for fast cars and over-the-top stunts, John Wick is known for its over-the-top fight scenes and loads, and loads, of guns. The films can be best described as what happens when Neo is reimagined in the real world as the deadliest assassin alive.

Not to be confused with game designer John Wick.

Arriving in New York City, John Wick attempts to escape from Zero and his subordinates, who chase him down with motorcycles. What ensues is a battle in a construction highway with swords whilst driving.

Arriving in New York City, John Wick attempts to escape from Zero and his subordinates, who chase him down with motorcycles. What ensues is a battle in a construction highway with swords whilst driving.