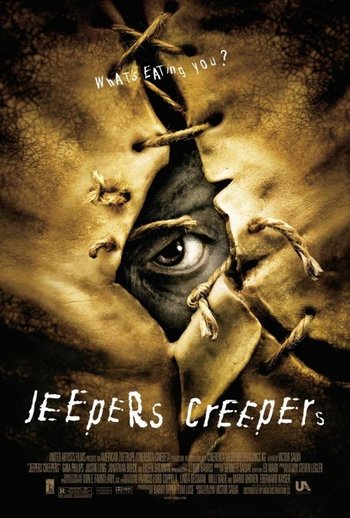 "Jeepers Creepers, where'd ya get those peepers?..."
Advertisement:

Jeepers Creepers is a 2001 horror/monster movie directed by Victor Salva, and starring Justin Long, Gina Philips, and Jonathan Breck. It takes its name from the song "Jeepers Creepers", which features in the movie.

The movie centers around Darry Jenner (Long) and his sister Patricia (Philips), as they take the scenic route home from college in Trish's banged-up old car, and their strange and frightening encounter on the lonely highway with what seems to be the crazed, obnoxious driver of an ominous green truck, who attempts to run them off the road. Later, from a distance, they witness the driver of the truck, dumping what appears to be bodies wrapped in bloodstained bags down a pipe, adjacent to an abandoned church. Seeing them, the driver of the truck engages the two in a terrifying road chase, but they manage to escape. Darry, against Trish's wishes, decides to go and investigate the old church in case there may be someone alive, only to make a horrific discovery. Much later, they discover that the driver of the truck is not initially as he seems...

Interestingly, the original script for the third movie apparently sets up a TV series.