Franchise / Jem and the Holograms 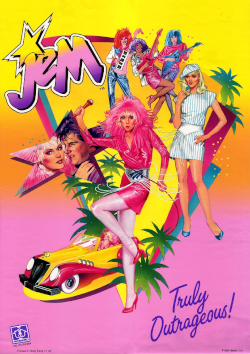 Jem and the Holograms is a franchise about a woman named Jerrica Benton who, along with her sisters, after the recent death of their father (and years after the death of their mother) find out that their father left them a supercomputer named Synergy. They use Synergy's holographic projection abilities to disguise Jerrica as a singer named "Jem" and become a hit pop band. The villains of the series include the Corrupt Corporate Executive Eric Raymond and the rival band and arch-enemies of Jem and the Holograms, The Misfits.

Jem and the Holograms is known for its very 1980s aesthetic. Even modern day incarnations keep the '80s Hair and 80s fashion. It is also one of the few franchises to get out of the Girl-Show Ghetto. It has a Periphery Demographic of both boys and LGBT adults. The franchise was considered dead, though well-remembered amongst 80s kids, until in the early 2010s it was revived with a film and a comic book.