Manga / The Weatherman Is My Lover 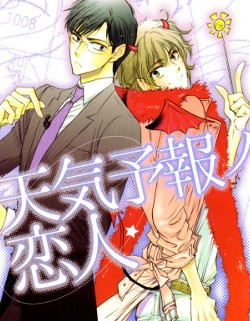 The Weatherman Is My Lover (Tenki Yohou no Koibito) is a Yaoi Genre manga by Madoka Machiko, which was serialized from 2005 to 2008 in Asuka Ciel and compiled into two volumes.
Advertisement:

A romance between a straight-laced newscaster and eccentric weatherman whose Boke and Tsukkomi antics form the core appeal of their program. Koganei is a talented newscaster whose misstep in covering a conflict-of-interest story got him downgraded to the early bird slot at Chou-Hayaoki TV. Amasawa in contrast is a free-spirited weather "fairy" on the program who does all his reports in elaborate cosplay. Under Amasawa's influence, Koganei begins to become more comfortable with his place at Chou-Hayaoki and falls in love with Amasawa, but, despite his apparent outgoing personality, Amasawa persistently keeps everyone at a safe distance.

The first volume covers their work relationship and inevitable romantic one, while the second volume involves another newscaster attempting to break them up while Koganei is on a work exchange in America. Overall a light-hearted and sweet Boys' Love story with a charming cast.

The Weatherman Is My Lover provides examples of: