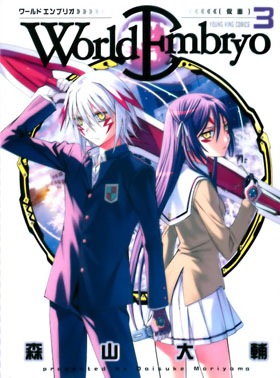 "So I woke up, and the world in front of my eyes was neither heaven nor hell, it was reality."
Advertisement:

World Embryo is a manga by Moriyama Daisuke, creator of Chrono Crusade. It was serialized in Young King OURS from 2005 to 2014.

Riku Amami, your average Ordinary High-School Student, receives a message from his long-lost step-aunt, Amane. She asks him to meet her in the hospital he was hospitalized at several years ago, "Please Find Me" she says. When arriving there, he hears a woman scream. Thinking it is Amane, he instead finds a gang of criminal youths who are attempting to rape a girl. Meanwhile, his entrance into the hospital has been spotted by two other young people, Rena and Youhei. They save Riku from the criminal youth gang, who run off. Youhei is revealed to be one of Riku's old friends from the period he was hospitalized.

Suddenly, all mobile phones in the building ring. Riku tries to answer his, but is stopped by Rena and Youhei. The youth gang, whose leader was just phoning for reinforcements on his mobile phone, do move to answer their phones. Just then, their leader's eyes split vertically, the eye halves turning away from each other, while his body is shaking. The other gang members notice this and ask what is wrong.

Cue next scene where a horrible monster with the gang leader's transformed face shows up behind the window behind Riku. Holding the shredded corpse of another gang member. Rena and Youhei see this, and Riku turns around. Seeing the horrible creature, Riku screams in horror and flees, still holding his mobile phone. Youhei tells Rena to deal with the monster, called Kanshuu, and goes to look for Riku. He finds him, but they are attacked by more Kanshuus. Riku flees again as Youhei defends him. Elsewhere in the building, Riku is attacked by another Kanshuu and then finds a mysterious cocoon, which once Riku touches it promptly kills the Kanshuu. The next day Riku wakes up in his bed and wonders if it all was a dream. Then he spots the cocoon sitting next to his bed...

Later that day at school, Riku remembers what happened at the old hospital. Remembering the monsters, and thinking of the cocoon, he realizes it too could contain a monster. He goes home, only to find his step-mother cowering on the table holding a frying pan, because some horrible creature is wandering around. After some hijinks involving his step-mother and the cocoon, he touches it again, and something emerges from the cocoon. Not a monster, but a little girl closely resembling Amane when she was only a kid...

After that, he enters a world beyond the scope of memories, filled with sorrow and heartwarming moments, all leading up to the Embryo.