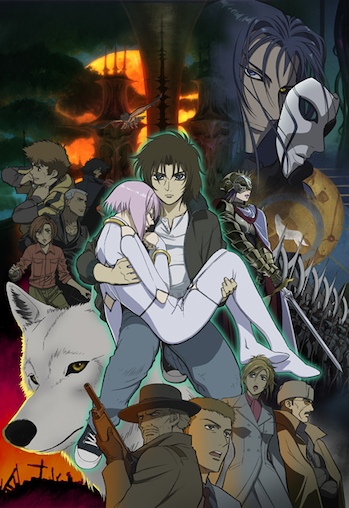 A voice calls to me... it says "Search for Paradise"...
Advertisement:

Wolf's Rain is an original anime created by Keiko Nobumoto, the screenwriter for Cowboy Bebop. It originally ran for twenty-six episodes from January to July 2003, but budget cuts and the SARS outbreak resulted in four consecutive clip shows (episodes 15 to 18); the broadcast series ends with the wolves foiling a Noble's attempt to enter Paradise, but without a proper conclusion to the story. Four OVA episodes, released a few months later (and listed on DVDs as episodes 27 to 30), brought closure to the story — but also received criticism for their dark and tragic events. The final episode also explains the show's title, as rain had only showed up in the opening titles until that episode. (Some TV networks outside Japan omit the OVAs from the show's broadcast.)

The Earth sits on the edge of death; years of war between greedy Nobles have reduced the world to a handful of high-tech, Giger-esque cities amidst a barren wilderness. Only a single, small hope still remains: an old legend which says that in civilization's last days, wolves will follow the scent of lunar flowers to Paradise. It sounds promising, but no one has seen either a wolf or a lunar flower for centuries... or so they think.

The world's remaining wolves learned how to project illusions that make them look and sound human in order to protect themselves. Four such wolves — Kiba, Tsume, Hige, and Toboe — meet up in one of the decaying domed cities after noticing the scent of lunar flowers in the air. They soon discover the source of that scent: Cheza, a mysterious young girl genetically bred from a lunar flower by a group of Nobles who want to open a gateway to Paradise.

When a Noble by the name of Darcia kidnaps Cheza to use her healing powers to help his Ill Girl fianceé, both the wolves and the feuding Nobles behind Cheza's creation chase after him. An obsessive wolf hunter named Quent complicates the feud, as he knows exactly how wolves protect themselves and works tirelessly to kill them at all costs (with the help of his loyal dog, Blue).