Anime / The Wonderful Galaxy of Oz 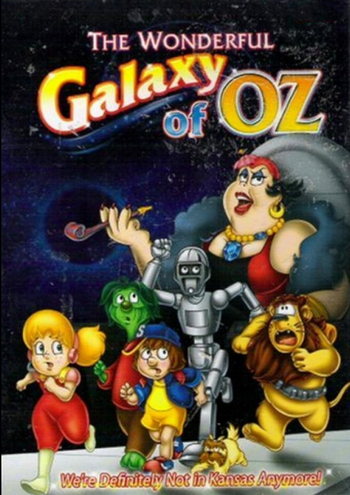 We're definitely not in Kansas anymore!

The Wonderful Galaxy of Oz is a 1992 animated film based off of L. Frank Baum's The Wonderful Wizard of Oz. The film is a highly condensed version of the 26-episode anime Space Oz no Bouken (Adventures of Space Oz).

In the year 2060, an 8-year old girl named Dorothy Gale and her genetically enhanced dog Talk-Talk are mysteriously swept off their planet of New Kansas. The duo end up in the mysterious galaxy of Oz, where they meet Plantman, Chopper, and Lionman, as well as the mysterious scientist Dr. Oz. To save the galaxy from the wicked witch Gloomhilda, they must find the three Crystals of Love, Wisdom, and Courage.

The Wonderful Galaxy of Oz is the Land of Oz series literally Recycled IN SPACE!, and as a result, it's looser than most adaptations.