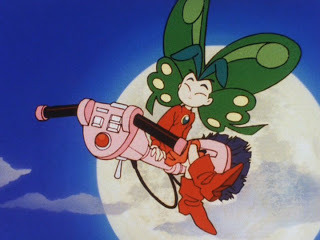 An anime series created by SUEZEN, produced by Group TAC and originally aired by NHK from 1992 to 1993.

Yadamon is a young Magical Girl of the Cute Witch variety who gets banished to the human world by her mother after wreaking havoc in the Witch Forest. On Earth, the very curious Yadamon gets into more mischief, learns to use her magical powers, makes friends with the humans, and faces threats by evil magical forces.