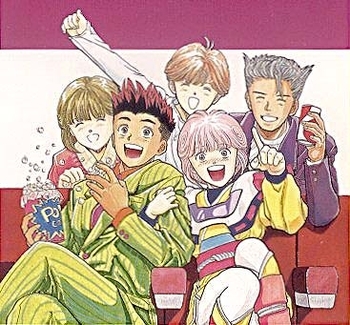 Youta Moteuchi is an Ordinary High-School Student whose father is always working abroad. Due to his bad luck with girls, he's nicknamed "Motenai" — "Dateless", and even worse for him, he's in love with a girl pretty much deemed as perfect, the beautiful and sweet Moemi Hayakawa. During a meeting, she tells him she likes Youta's best friend Takashi Niimai...and then Youta, instead of sulking or revealing his feelings, promises to help her get Takashi's love.

After making said promise and feeling like crap about it, Youta finds himself in front of a video rental store he has not seen before. The man in charge of the store says that, since Youta truly meant what he told Moemi, he deserves a prize ...like borrowing one of the videos of the store. Its name is "I'll comfort you!" and has a beautiful girl on the cover.

Youta goes back to his Cool House, plays the video on his VCR...and then the girl pops out from the TV! Her name is Ai Amano, and she's come to help him with his woes. Unfortunately, Youta's VCR was broken, therefore Ai-chan's programming is seriously messed up. She lost a few cup sizes, she can barely cook, she's clumsy, she puts her feet in her mouth, she teases Youta mercilessly ...and for better or for worse, she develops feelings for him, when she's supposed to just counsel and console the boy, and this is just the start.

Video Girl Ai (電影少女,Den'ei Shojo?, lit. "Video Girl") is a manga series created by Masakazu Katsura and published in Shueisha's Weekly Shonen Jump. It also has an anime adaptation. The manga is published in English by Viz Media. It was formerly published in the anthology Animerica Extra by Viz. It was started in 1989 and continued until 1992, and fifteen manga volumes were produced. The first 13 volumes tell Ai Amano's story. The last two volumes, which came years later, focus on a new video girl named Len, hence the new name for these two volumes Video Girl Len.

The Video Girl Ai anime is a six part OVA series which was produced by I.G. Tatsunoko. The series was released in 1992 by Jump Video. It roughly covers most of the material found in volumes 1 and 3 of the manga (and some of Volume 2). An obscure live-action movie was also made.

It was announced in November 2017 that Video Girl Ai will receive a live-action TV drama sequel in January 2018. Called Denei Shoujo ~VIDEO GIRL AI 2018~, it is set in 2018, 25 years after the original manga, with Shou Moteuchi, the nephew of the original protagonist Youta Moteuchi, as the new protagonist. After his parents' divorce, Shou has lived in his uncle Youta's house. Like his uncle almost 30 years before, he too has secretly fallen in love with a beautiful classmate, in this case a girl named Nanami Shibahara. However, Nanami has good feelings toward Shou's best friend Tomoaki Furuya, so the future of his romance is seemingly hopeless. One day, Shou finds a video tape. When playing it with a VCR coated with dust, a "Video Girl," who was sealed 25 years before, pops out through the screen. Then Shou and the video girl, "Ai," start a strange joint life for three months...

Video Girl Ai has examples of: