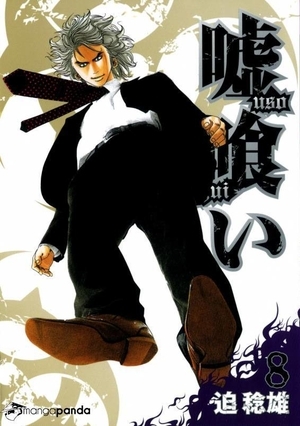 You... are a liar.
—Baku's quote after winning a game
Advertisement:

Usogui is a long-running psychology-and-gambling-based seinen manga by Toshio Sako. The manga ran in Weekly Young Jump from 2006 to 2017 for an impressive 49 volume and 539 chapter serialization.

There are gamblers out there who even bet their lives as ante. But to secure the integrity of these life-threatening gambles, a violent and powerful organization by the name of “Kagerou” referees these games as a neutral party. Follow Baku Madarame a.k.a. Usogui (The Lie Eater) as he gambles against maniacal opponents at games – such as Escape the Abandoned Building, Old Maid, and Hangman – to ultimately “out-gamble” and control the neutral organization of Kagerou itself.

An OAD shipped with the 26th volume in 2012. While there has been an announcement and plans for a live action adaptation as early as 2016, it took over 5 years for another peep to be made about it. The movie is set for release in 2022.

In April 2021, a spinoff manga was announced for the series. It's an immediate sequel, taking place just days after the end of the first manga. Baku, now in charge of Kagerou, advises each of the referees to tell him about a previous match they presided over and allow him to bet on who won it. He starts with Hikoichi Yakou, No.0 referee in Kagerou.