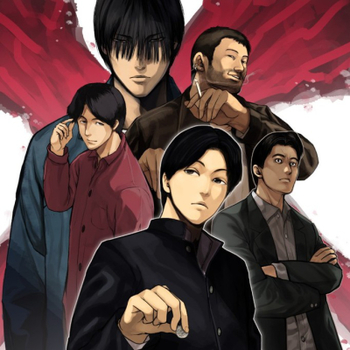 Are you man enough to fight with them?
Advertisement:

In Japan, there is a man known as a professional gamer: Daigo Umehara. Recognized as one of the pound-for-pound best players in the history of competitive fighting games, he currently holds the Guinness World Record for having earned the most money in his chosen career. But before he became Japan’s most well-known pro gamer, Daigo was but one of many who battled their way through Japanese arcades during the golden age of fighting games. This is his story...

Written by Itaru Orikasa and Maki Tomoi and illustrated by light novel artist Kengoro Nishide, Umehara Fighting Gamers is an ongoing Seinen biographical manga about the early years of legendary Street Fighter player Daigo "The Beast" Umehara as he faces up against—and forms lasting bonds with—other expert gamers in a quest to see who will emerge as Japan's foremost fighting game champion during the Renaissance period of arcade gaming. While the story focuses on Daigo's development for the most part, other notable Japanese professional gamers such as Shinya "Nuki" Ohnuki and Kurahashi also take the spotlight from time to time, interacting with Daigo and showcasing their own innermost motivations for trying their hand at professional gaming.

In 2017, Udon Entertainment (of Street Fighter comic fame) announced that they had successfully received the rights from Kadokawa Shoten and Capcom to localize and publish the manga for Western audiences, under the new title of "Daigo the Beast: Umehara Fighting Gamers!". Early-print copies of the first English language volume were sold and distributed during EVO 2017. Meanwhile, the original Japanese version can be read for free at Kadokawa's Young Ace UP

Forget danger, you won't be safe from these tropes anyway!