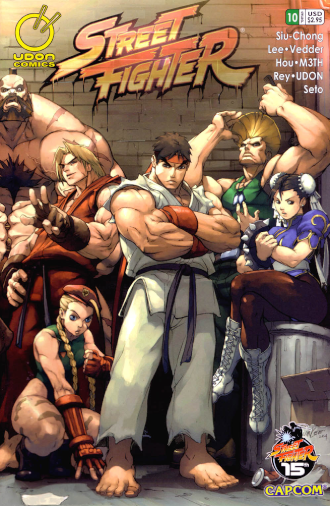 These Street Fighter comic books are provided by the U.S. / Canada writer / artist collective UDON. This is the second time the series has been adapted into comic book form, with the first being the three issue run by Malibu Comics.

Started in 2005, the book mostly chronicles Ryu and his path of a true fighter, plus Guile and Chun-Li's operation to bring down Shadowloo and its head, M. Bison. The story cuts to other fighters along the way who either interact directly with Ryu, get caught up in the military investigation, or are working for or have gained the ire of Shadowloo. The series was originally published by Image before moving to Devil's Due Publishing, but eventually UDON started self-publishing the whole thing.

Here the rundown of the series:

At the end of most of the issues (mostly those in Turbo) are short stories involving characters from Street Fighter III and Final Fight.

Comics that focus on one specific character.

In 2016, the series got into a crossover with G.I. Joe where Shadowloo teams up with COBRA to take over the world and of course the heroes of the Street Fighter-verse partner with the Joes to stop them. All of this conveniently taking place within a tournament. IDW Publishing however was in charge of that one and it has no bearing on this series.

As of July 2015, the early main series comics are viewable for free online