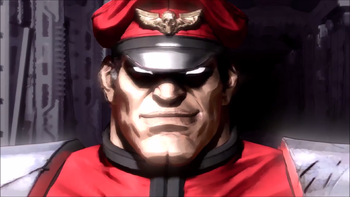 This place shall become your grave.
Under Bison's rule, the world was wrapped in the darkness of one man's evil.

While not nearly as violent or horrifying compared to Mortal Kombat, Street Fighter is no slouch in the Nightmare Fuel department either.

open/close all folders
The Games

The Film
Comics
The Ruby-Spears Cartoon