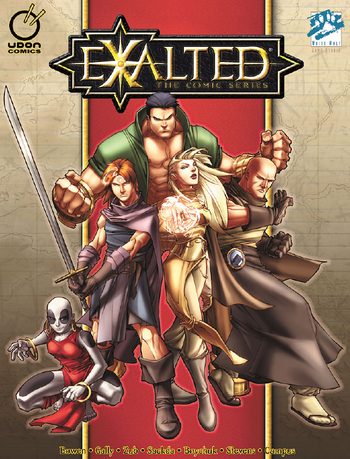 Exalted is a comic book title produced by UDON Entertainment Corporation, based on the role-playing game Exalted. UDON published six issues of Exalted between 2005 and 2007. The series did poorly due to an erratic publication schedule and presentation of several in-game concepts. It is currently available for purchase in PDF and POD trade-paperback form from DriveThruRPG and Amazon.com.
Advertisement:

Exalted follows a newly Exalted Eclipse caste named Kidale who finds himself adopted into an all-Solar Circle working out of Chiaroscuro. Trying to find out the source of a recent rise in Hungry Dead, the Circle investigates the ruins of a nearby Solar Tomb and struggles to avoid the attention of the Dragon-Blooded.

Its characters can be found in the Character Sheet for the Tabletop Game.