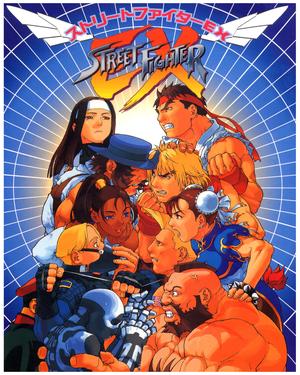 This is how fans see the relationship between Capcom and Arika.
Advertisement:

In 1996, Street Fighter EX was developed by Arika (a company founded by Final Fight and Street Fighter II co-designer Akira Nishitani) and published by Capcom as an attempt to bring the normally 2D Street Fighter series into true 3D. The game saw the return of Ryu, Ken, Chun-Li, Guile (in his first game since Super Street Fighter II Turbo), Zangief, Akuma and M. Bison. New characters, who are fully owned by Arika, were also added. These characters include:

The game played similar to Street Fighter Alpha, but with the addition of side-stepping (albeit only as an aesthetic element of certain specials; unlike, say, Tekken, it was not a universal mechanic), guard-breaking attacks that makes the opponent temporarily dizzy, and special moves and Super Combos that can be cancelled into other Super Combos.

In 1998, Street Fighter EX2 was released and added Excel Combos ("Excel" being an abbreviation for "Extra Cancel"), Custom Combos similar to the ones seen in the Alpha series. This game also marks the first time that a Street Fighter game within its own sub-series removes characters from the roster as Akuma, Sakura, M. Bison, Cycloid β, Cycloid γ, Pullum, Darun, Allen, and Blair were cut. In their place came Street Fighter II veterans Blanka and Vega and four newcomers:

Street Fighter EX2 Plus brought back Pullum, Darun, and Bison and then added Ryu's rival Sagat, Area (a young inventor with a giant mechanical arm), and Vulcano Rosso (fiery Italian fighter). Hayate was dropped from the arcade version of EX2 Plus, but returned for the PlayStation version. EX2 Plus also added Meteor Combos, a precursor to the Ultra Combo system later introduced in Street Fighter IV. Aside from Super Cancels, EX2 allowed for Super Combos to be cancelled into a Guard Break (Cancel Break, which could then be followed up by another Super Cancel if the player had enough/infinite meter) or a Meteor Combo (if the game allowed the player at the time to have infinite super meter or more than three bars).

In 2000, Street Fighter EX3 came out exclusively for the PlayStation 2. A Tag Team and Dramatic Battle system was added, complete with various new gameplay mechanics such as Meteor Tag Combos. Everyone from Street Fighter EX2 Plus (except Hayate) returned, as did Sakura, from Street Fighter EX Plus α. Ace, the sole new character for the game, was a character that could have moves from other fighters added to his move list at the player's discretion. Guard Breaks were replaced by the somewhat similar Surprise Blow, losing their unblockable properties but able to stun crouching opponents, floor airborne ones, and inflict chip damage as well as costing no meter to use, while Momentary Combos, two special inputs for each character allowing them to cancel from one special move to another unique special with the press of a precisely-timed single punch or kick, were added. The Excel from Street Fighter EX2 Plus was essentially replaced with the Critical Parade, a new mechanic added to Street Fighter EX3 wherein the standby character in a partner match would join their teammate and both characters could use unlimited Super Combos for a brief period of time, not unlike the Duo Team Attack from Marvel vs. Capcom: Clash of Super Heroes.

of a test project for the Nintendo 3DS known as Fighting Sample (alternatively, Project EX) featured (some of) the cast of the EX series. However, this only proved to be a tech demo of sorts, and Arika currently has no plans to make it into an actual game. On September 19, 2016, Capcom released a profile and artwork on Darun Mister

which also mentioned Pullum Purna and connected him to the plot of Street Fighter V.

to show off. The announcement, meant to celebrate Arika's extended 20th anniversary note the company was founded in 1995, came on April Fools' Day, leading many to initially believe it was a joke. Others thought the game looked way too real and polished to possibly be a joke (explained in part here

), and as it turns out, the game is indeed playable

and was even live

at a promotional exhibition event-slash-location test

featuring Arika staff members and notable Street Fighter player Ryota "Kazunoko" Inoue. (According to Akira's vice president Ichiro Mihara, the development of Fighting EX Layer being hidden for so long was, in fact, the joke.) At EVO 2017, the game was confirmed to be under development for the PlayStation 4 with a simultaneous launch in 2018.