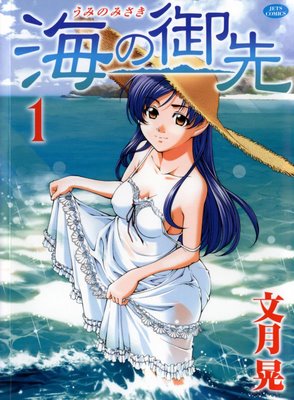 Umi no Misaki is a seinen manga by Kou Fumizuki, creator of Ai Yori Aoshi. It was serialized in Young Animal from 2007 to 2014.

Shortly before his father gets transferred to New York, Tokyo High School student Goto Nagi travels to his deceased mother's birthplace on the island of Okitsushima. Soon after he arrives a local girl named Shizuku offers to show him around and even saves Nagi's life when he accidentally falls off a cliff. However, when he meets her again the next day at school she refuses to have anything to do with him.

Nagi soon learns that Shizuku only felt free to be herself with him because she thought he was a tourist, something that's not longer possible now that he's going to stay. That's because Shizuku, fellow classmate Soyogi and his neighbor Karin are the Cape Maidens, worshiped as goddesses by the people of the island as representatives of their Dragon God. And because his mother was also a Cape Maiden and his birthday matches the day that the previous Dragon God died, the islanders believe Nagi is the current mortal incarnation of the Dragon God.

Naturally, the position comes with a harem: the Cape Maidens. And just as naturally, all four of them have some decidedly mixed feelings about that. Now Shizuku, Soyogi and Karin must fulfill their duties as Cape Maidens by earning Nagi's favor while Nagi tries to settle into his new role as Dragon God. It's not always easy trying to figure out just what the Dragon God is supposed to do... especially since there's some very important things about being the Dragon God that the locals aren't going to tell him.

Umi no Misaki differentiates itself from stereotypical Harem Series by its character development and its approach to the Harem Genre's standard tropes. Although Shizuku is originally set up as the obvious winner, Nagi spends time with all three of the girls, shows an interest in their daily lives and hobbies, helps them with their work, cooks for them and shows genuine concern for their feelings.