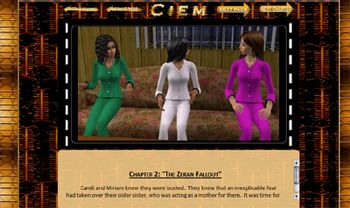 "Machinomics" are comic-styled narratives that combine video game screenshots with player narrative to tell a story. They're like Machinima, only they're the static Webcomics version. They may crossover with other genres of media, or may be played straight. A straight-up Machinomic is one in which all the characters, backgrounds, etc. are created INSIDE of a video game or similar medium. However, a Machinomic may also import video game characters into Photo Comic backgrounds or may even place Real Life actors inside of video game backgrounds. This forum

bears an early example of this term being used. However, the term has now been adopted elsewhere, including on Comixpedia.

A Machinomic differs from a Sprite Comic because the characters are fully 3-D, as opposed to using sprites like those in early video games.

Reasons run the gamut for why someone would choose to make a Machinomic instead of simply making Machinima. Perhaps you are a lousy editor, or your video card is inferior. Maybe you're planning to do stuff that isn't possible in-game for the sake of telling a better story. Or maybe, you just don't have good audio recording equipment. Or, perhaps you have bandwidth issues. Or perhaps you're hand-making every model and prop in 3D editing software, instead of a 3D engine released with a game. Regardless your reasons, Machinomics can be a good substitute for dozens of other Webcomics formats and for Machinima. Machinomics may use a variety of Webcomic publication formats, from being straight-up comic strips to formalized DVD-Storybook Hybrid Webcomics

(a.k.a., DSHW, inspired by storytelling exchanges on game websites and by DVD menus) to basically anything.

Machinomics bear some flexibility over Machinima in the simple fact that the user only needs to assemble images and text using screenshots and manipulating them with image software. A live screenshot may be captured from any work, but scripted shots are just as possible. Games that allow a user to pause gameplay without obstructing scene view are particularly useful. Quick machinima video clips may also be paused, with clips from these videos assembled into Machinomic material.

Popular sources of Machinomics include Rainbow Six, The Sims, F.E.A.R., Halo and Garry's Mod for Half-Life 2.

Not surprisingly, there's a lot of overlap between this trope and a Let's Play, particularly the narrative type rather than an illustrated fanmade walkthrough.

Not to be confused with machine economics.

Examples should be listed according to the game software used to make them.