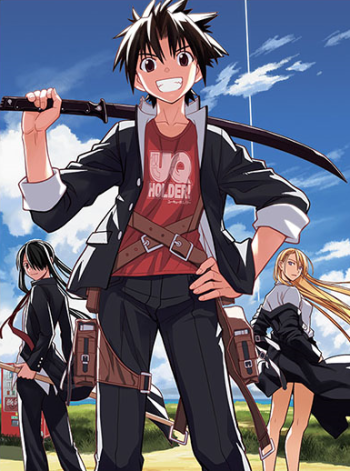 "Living forever isn't as great as you think. [...] This is the story of those who—for whatever reason—got stuck in this sucky existence."

In the year 2086, magic is already a fact of life, having been revealed ten years earlier, allowing for an acceleration of technological progress culminating in the creation of a massive skyscraper that literally pierces the heavens.

Touta Konoe is one such boy who dreams of scaling it and finding out what lies atop that tower. His mentor/guardian Yukihime claims it can only be crossed if he can defeat her, a feat nigh-impossible but something he will nonetheless try.

One day, however, a bounty hunter mortally wounds him, forcing his target, Yukihime, to reveal herself as Evangeline A.K. McDowell, the notorious daylight-walking vampire who was also the friend and mentor of his supposedly-deceased grandfather: Negi Springfield, the boy-mage who saved the Magic World seventy-five years ago. To save his life and honor a request from his dying parents, she transforms him into a vampire.

Despite what Yukihime/Evangeline warns is a life of solitude, Touta is more than willing to journey into a world of immortals in a society where the line between magic and technology have become blurred.

UQ Holder! (aka ユーキューホルダー!, or "Eternity Holder!") is the sequel of Negima! Magister Negi Magi by Ken Akamatsu. Set 75 years after the end of Negima!, in an Alternate Timeline, it explores a number of ambiguous or unexplored details left at the end of that series, such as the space elevator and the adoption of magic on earth. The story began serialization in Weekly Shonen Magazine in late August of 2013, and later moved to Bessatsu Shonen Magazine in October 2016. In November 2016, the manga was retitled UQ Holder!: Magister Negi Magi 2, more or less confirming its sequel connection to Negima!. In February 2022, the manga officially concluded with its 192nd chapter.

UQ Holder! is one of the first round of manga to be simultaneously published

The series received an Animated Adaptation By JC Staff in Fall 2017.