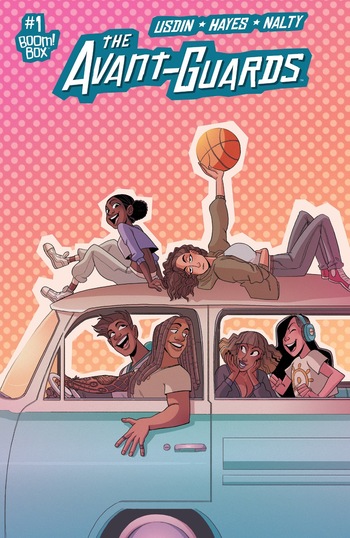 The Avant-Guards is a 2019 comic book series by writer Carly Usdin (of Heavy Vinyl fame), and illustrated by Noah Hayes (pencils), Rebecca Nalty (colors), and Ed Dukeshrire (lettering). The series takes place at the Georgia O’Keeffe College of Arts and Subtle Dramatics, an all-girls art college and focuses on their rookie basketball team (named the "Avant-Guards"). New transfer student and former athelete Charlie wants to start over as a filmmaker, but as the new team tries to recruit her, she finds that she must deal with her past sooner or later as well developing relationships with her friends, and a possibly romantic one with spunky go-getter Liv.

The series ran for 8 individual issues and concluded in a trade volume in 2020.