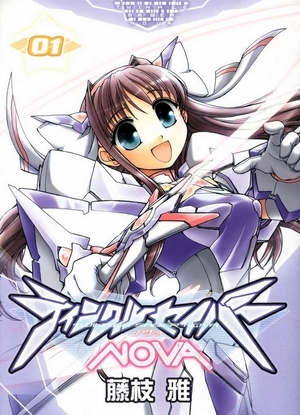 Twinkle Saber Nova is an on-going manga by Miyabi Fujieda, best known for the yuri gems The Miko's Words and the Witch's Incantations and Iono the Fanatics. Unlike said two works, TSN is a rather Genre Savvy shounen fighting comedy where lunches are Serious Business and most characters are adorable girls. It is, in fact, a remake of Fujieda's obscure debut doujinshi Twinkle Saber.

The Misaki Academy High School, built on an island in the Tokyo Bay, is known for its laissez-faire approach to student activities. The pursuit of the students' freedom goes so far that even the most outlandish club activities are allowed. One of such clubs is the recently-established World Domination Club, that aims at nothing less than, well, taking over the world. However, since the world and even Misaki Academy are too big for them (yet), they decide to start small by taking over the Misaki Lunch Program and its associated restaurants first.

Enter our heroine, the high school sophomore Hayana Suzunari, who may be not too bright but really loves her lunches and won't give them up to anyone without a fight. Unfortunately for her, the WDC has enlisted some of Misaki's strongest fighters to help them, but soon enough her teacher Kirise Fujishiro offers her a Powered Armor suit, "Twinkle Saber", to combat the WDC in return for her joining Kirise's own club, the Ally of Justice Club (current membership: zero). Much to the surprise of Hayana's best friend Aoi, she agrees immediately and proceeds to kick the WDC's butts in a manner most awesome. Thus begins the story of two very strange clubs' rivalry...

) is that this manga is set in the Fujiedaverse, but about 40 years after all other installments, like Amber Teahouse and Witch and Miko.