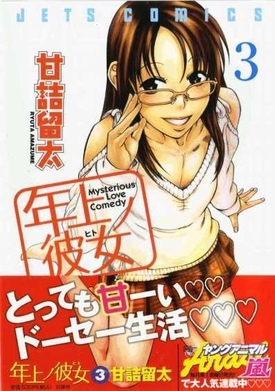 Toshiue no Hito ("Older Girlfriend") is an adult manga by Ryuta Amazume about the relationship between a young university student and an older woman.

Tsutomu is starting his second year of university when he has a dream about a girl he never remembered meeting. Considering what happened in the dream, he and his friends wonder why he couldn't remember if it happened or not.

As they walk to their club's stall at the university fair, he sees what looks like a cute teenage girl applying to join them. Who looks identical to the one he dreamt of.

When they go out for drinks, she introduces herself as Osanai Ageha and reveals that she's 25 years old, to the disbelief of everyone.

Then everyone gets drunk, Tsutomu ends up at her place but before things can progress, he gets a call to say that his dorm burned down. Later, as he's asking round for a place to crash, Ageha offers him the chance to live with her. What follows is an exploration of two people growing together as a couple, with plenty of upheaval caused by their respective baggage.

The manga was serialized in Young Animal Arashi from 2004 to 2007, and was compiled into six volumes.