A Light in the Distance 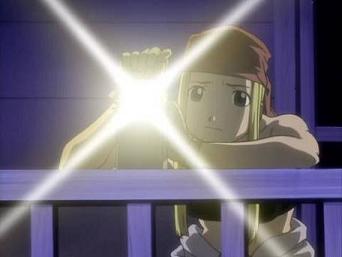 "Mom would always put a light in the upstairs window, so no matter how dark it was, we could find our way home."
"What's that? A transport! I'm saved!"
— C-3PO, Star Wars: A New Hope
Advertisement:

So, you've got characters who are either lost, or are caught in some sort of storm. All seems hopeless...

...But, what's this? There's a light in the distance. Our heroes may have found shelter from that dreadful storm or, at least, a place to rest before resuming the journey. Yes, it seems that one of the ways to show the audience that characters have a glimmer of hope in an otherwise gloomy situation is to have something light the way, literally.

This is caused at least partly by the fact that, celestial bodies aside, light-producing objects are rare in nature—particularly those producing steady light, visible over a distance. So any light visible at night, or in a storm, is a sign of humans (or, in Speculative Fiction, any intelligent beings) and civilization.

Of course, the source of this light frequently turns out to be bad, and possibly worse than whatever our heroes were seeking shelter from. This particular wrinkle dates back at least to Hitodama Light and Will-o'-the-Wisp from folklore.

Lighthouses are common sources of such lights. So are fires and burning buildings. Ambulance lights/sirens are also used occasionally.

Can easily overlap with Faux Symbolism. See also Survivalist Stash for a similar place of hope and danger.