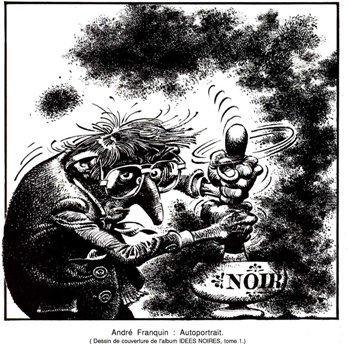 Idées noires (Dark Thoughts) is a collection of Black Comedy comic strips by André Franquin and Yvan Delporte. Deeply cynical and the result of Franquin's struggle with depression, it's one long parade of industrial recklessness, suicides, executions, military recklessness, ecological disasters and other accidents and contrast hard with his work on Gaston Lagaffe, the Marsupilami and Spirou and Fantasio. Apart from the obvious, the title is also a play on the unique art style which uses so much black that it almost looks like a negative of a regular black and white comic.

The full collection was eventually released in English in 2018, retitled Die Laughing.