Video Game / When The Darkness Comes

ALL SPOILERS ARE UNMARKED. This game is meant to be experienced. It is free-to-play and rather short, so it's recommended to download and play this game first before proceeding. 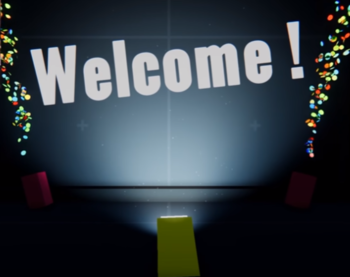 The first screen of the game- and the most pleasant by far.
...Follow The Light.
Advertisement:

When The Darkness Comes is an Indie Psychological Horror Game made in 2019 by Sirhaian for Windows.

The game, essentially, is a "walking simulator" that takes the player through surreal and ever-changing environments, intended to illustrate the feelings of depression and anxiety in an interactive format. You are introduced to the game by the developer, who doesn't seem to believe much in his game, and by journeying through the game and accomplishing the tasks he gives to you, you begin to find out his story. There is also a whole slew of strange shadow people NPCs and a mysterious woman on a swing.