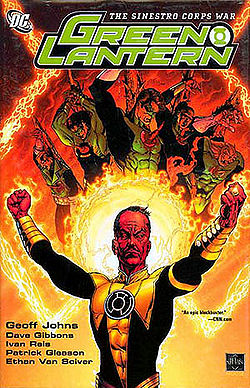 Magenta space Hitler is go!
"In Blackest Day, In Brightest Night
Beware your fears made into light
Let those who try to stop what's right
Burn like his power... Sinestro's might!"
— Sinestro Corps Oath
Advertisement:

Following his defeat in Green Lantern: Rebirth, Sinestro has retreated back to Qward, where he has taken over and started to amass an army of Yellow Lanterns capable of "instilling great fear." Modeling his army after the Green Lantern Corps and allying himself with the Anti-Monitor, he launches an all out war against the Green Lanterns.

The story entered production in 2006 and was released following the Sinestro Corps Special in June 2007. It proved to be a massive success, financially and critically. Fans consider it among the best Green Lantern stories and it is easy to see why. It introduced new storyline concepts including the variously colored Lantern Corps and the emotional spectrum.

This crossover contains examples of: