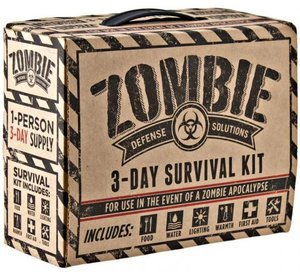 It's The End of the World as We Know It, or at least whatever small part of it the protagonist used to live in, and in the ensuing chaos our worn down, desperate and starving heroes stumble upon a Survivalist's Stash. It seems someone was Crazy-Prepared enough to assemble a shelter, bunker, or some other refuge with all the essentials. Food, water, electricity, first aid, and good old guns!

The heroes will marvel at their good fortune, and lament the irony that the person responsible for this gift died without being able to use it. Or did they?

Much like Goldilocks and the Three Bears, they may be trespassing into a very crazy survivalist's home without realizing it! Odds are even that they'll manage to defuse the following armed confrontation, though they may end up being chased out or having to kill the survivalist in self defense.