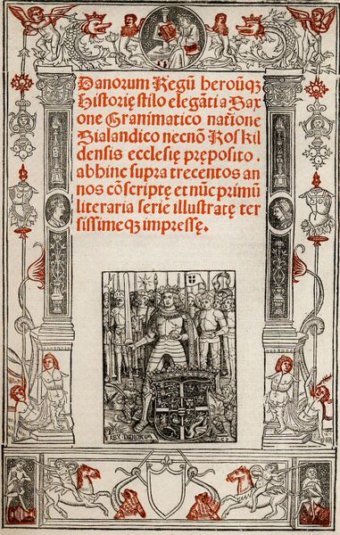 First page of the 1514 print.
Advertisement:

Gesta Danorum is a monumental medieval history of Denmark, written by a certain Saxo between c. 1185 and 1210 AD. The name that Saxo gave to his work is not known, and it has been referred to with a variety of names. In recent times, Gesta Danorum has emerged as the most frequently used title. This literally translates to Deeds of the Danes, but may more idiomatically but more boringly be rendered as Danish History.

Saxo (c. 1150-1220) was, according to his own words, a descendant of a line of warriors and a secretary to Archbishop Absalon of Lund, who, having diagnosed that Denmark was in need of a big patriotic national history, convinced Saxo that he was the right man to write such a book. Not much else is certain about Saxo except that during his lifetime, he was nicknamed "the Long", but after his death became known with the epithet "Grammaticus" ("the Learned"). This byname he probably earned for what was his main qualification in Absolon's eyes: His ability to write a sophisticated Latin style, considered unusual to admirable in his time and stilted to unintentionally funny today.

Gesta Danorum consists of 16 books of which Nos. 1-9 are considered mythology and 10-16 history. Although Saxo did not suggest any such division, modern editions usually use a corresponding two-part structure.

As a source on Norse Mythology, Gesta Danorum has been in the shadow of the Icelandic Eddas and Sagas since the 19th century, although before it, the opposite was the case. Thanks to its use of Latin rather than Old Norse, Gesta Danorum appealed to Renaissance scholars and was first printed in Paris in 1514, which is why the story of Amleth could find its way to Elizabethan England to serve as the basis of William Shakespeare's play Hamlet.note Though Shakespeare got it via François de Belleforest's French Histoires Tragiques (1570). 2022's The Northman loosely adapts the story of Amleth.

You can find the Latin original text

and the 1894 translation by Oliver Elton