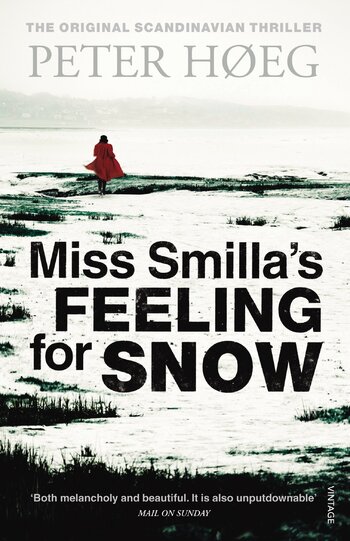 Miss Smilla's Feeling for Snow (also known as Smilla's Sense of Snow in the US and as Frøken Smillas fornemmelse for sne in the original Danish) is a widely-acclaimed 1992 novel by Peter Høeg.

Smilla Qaaviqaaq Jaspersen is an highly introverted and bloody-minded half Greenlandic/half Danish woman living in Copenhagen. One of her few (possibly her only) friend is her neighbour's son Isaiah who is also Greenlandic. When he falls to his death from their apartment building she is suspicious. Isaiah suffered from vertigo and when she sees his tracks on the roof, her intuitive understanding of snow shows her that he was running for his life. Despite hostility from the authorities she begins to investigate, leading her back to Greenland and a far-reaching conspiracy.

Written in the first person, the novel deals with themes of alienation, post-colonialism and how people survive mentally in societies they find inimical.

Smilla's Sense of Snow, a film adaptation directed by Bille August and featuring Julia Ormond in the title role, was released in 1997.