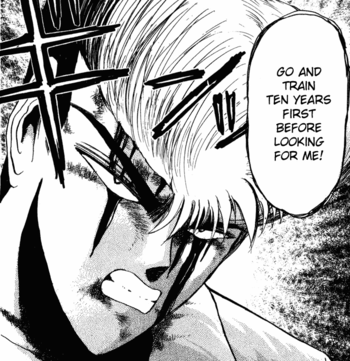 A stock insult used by the Japanese to show the confidence of a certain character in a one-on-one match, or just to say that a character is out of their league.

Most commonly used before a fight. A character will often say "You're 100 years too early to be facing me." Or any number of years they choose. 100 is most common. In works involving characters that live significantly longer than humans, 1000 or more years might be substituted. The English equivalent would be to call someone "too green" or, less literally, "out of their league".

Not to be confused with someone being years too soon to joke about a tragedy. Or The Jailbait Wait for characters younger than the age of consent. You Are Not Ready tends to be along the lines of advice than taunting.