Video Game / Inuyasha: The Secret of the Cursed Mask 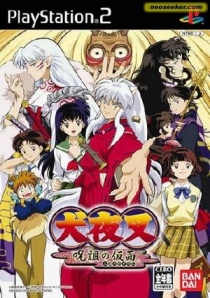 Inuyasha: The Secret of the Cursed Mask is a turn-based RPG for the PlayStation 2 published and developed by Bandainote Current copyright is held by Bandai Namco Entertainment, based on the Inuyasha anime.

The game centers on Canon Foreigner Kururugi -whose gender is chosen by the player- an Ordinary High-School Student who, while helping their father prepare for a festival, is suddenly whisked away to Feudal Japan. Soon after arriving, s/he learns to harness the power of the Shikigami and falls in with Inuyasha's group, whom s/he teams up with in order to find a way home, which seems to lie with Naraku and his new ally, the mysterious Utsugi...

Inuyasha: The Secret of the Cursed Mask provides examples of: