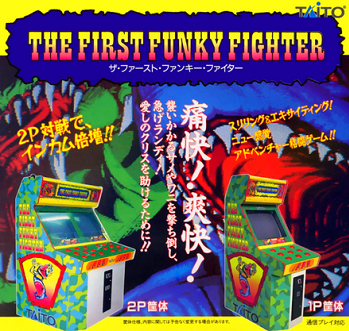 A 1993 Arcade Game developed by Nakanihon Wreath (who also developed the similar games Exciting Animal Land Jr. and Monkey Mole Panic for Taito, which were more kid-oriented) and East Technology and distributed by Taito, The First Funky Fighter is an even more awesome whack-a-mole clone. In a nutshell, what happens when you cross Fist of the North Star with a whack-a-mole game of all things? Well, you punch out crocodiles and sharks all to save the lady of your dreams.