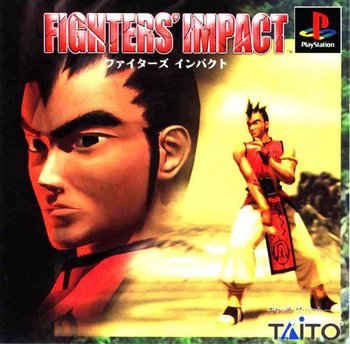 Who will be the true winner?
A Japan only Fighting Game developed by Polygon Magic and published in 1996 by The Taito Corporation for the PlayStation. It would later be released in the arcades in Japan in 1997 under the title Fighters' Impact A.
Advertisement:

The combat system seems to be reminiscent to that of Virtua Fighter, but it features a so-called "motion slide combo" system, which gives players the freedom to come up with their own combos. Technically, any move can be cancelled into any other move. However, using the same move twice within a combo string will cause your character to "overheat", leaving them momentarily unable to attack. Furthermore, getting hit while in the heat state will stun your character and leave them open for further attacks. The system simultaneously allows newcomers to play an effective offensive game, penalizes button mashing and enables all kinds of high-level combos. After the fighting game craze eventually dwindled, developers have been working hard at striking a balance between depth and accessibility.

The game is notable for how it was brought over to the West. Wanting to cash in on the 90s fighting game craze, THQ went to Polygon Magic and had them create an "Americanized" version of the game called Vs.. The game featured a new cast with designs by Marvel Comics artist Kurtis Fujita.

The game is worth tracking down for serious fighting game fans.