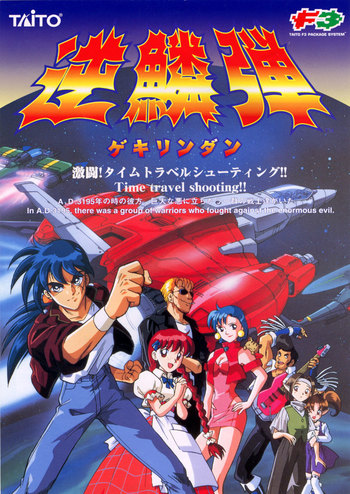 Brave Hokuto! Beautiful Shario! Fight together with the comrades. Destroy the enemy "Huge Boss" to save the human race from the danger of extinction!
Advertisement:

Gekirindan (逆鱗弾 "Imperial Wrath Bullet") is a 1995 vertical scrolling Shoot 'em Up Arcade Game developed by Taito where players select one of three different fighters (a futuristic fighter jet, a helicopter conditioned to space travel and a remodeled old-fashioned plane) against a destructive army of mechs throughout different time periods. Each fighter has a different shot pattern that can be upgraded or changed. There are also the side-weapon pick-ups including a pair of homing lasers, diagonal firing napalm and missiles. Gekirindan would later receive a 1997 Japan-only Sega Saturn port.

In the year 3195, a time machine is created on Earth for the sole purpose in having to research and preserve the rich and detailed history of humanity for years to come, but from within one fateful day, the time machine itself is unexpectedly stolen by an unidentified, mechanized being who is known only as Huge-Boss. This mysterious yet malevolent entity, who desires to rewrite history in order to establish itself as the supreme and undisputed ruler of the world, uses the time machine to travel back in time and destroy 3000 years of human history. The only resistance that Huge-Boss and its loyal forces faces is a small united group of seven pilots from different time periods who all aim to stop Huge-Boss and help save all of humanity while also attempting to gain and achieve their own personal desires as well.

Hokuto Higara: The main protagonist of the game. A strong though effeminate-looking pilot from the 3100s era whose parents were killed by Huge-Boss' merciless attacks against humanity. With his mother's hair ribbon as his only tangible remnant of them, Hokuto vows to avenge their deaths via the destruction of Huge-Boss and thus Hokuto himself heads straight into battle against his sworn enemy, being aided and accompanied by his childhood friend/love interest Shario and the rest of their fellow comrades.

Anne Kutos: A red-haired young woman from the early 20th century who pilots a helicopter as she fights to save both her family and friends from the dangerous threat of Huge-Boss. Anne writes all of her experiences from within a personal diary as she goes through life itself. This 'Anne' is reminiscent of Anne Shirley, a literary character who is very popular in Japan.

Dietza Savis: A wild rockabilly pilot from the 1950s era who is partially based on Elvis Presley. Dietza sees the battle against Huge-Boss as a strong opportunity for him in having to help advance his own rock and roll career while also proving his worth as a talented musician with a strong sense of justice.

Grother Fedel: A confident no-nonsense pilot from an unknown time period who battles against Huge-Boss for his own undisclosed personal reasons. Grother keeps a picture of a beautiful dark-haired woman with him, but it is unknown of who she is and how she's connected to Grother.

Shario Vissen: The main deuteragonist of the game. A beautiful and ingenious young woman from the 3100s era who vows to fulfill the last wishes of her recently deceased sister and that the promise itself will truly be accomplished via the destruction of Huge-Boss. Shario always travels with her strange-looking pet cat wherever she goes and that its own cute presence and appearance usually helps give Shario both hope and determination when it comes to her own personal resolve. Aside from that, Shario is also a childhood friend/love interest of Hokuto, having developed personal feelings for him over the years and vowing to be by his side as the two of them and the rest of their fellow comrades battle against Huge-Boss and its loyal forces.

Orsa & Mayoru: Two young elfen pilots and nature lovers, possibly from the 3100s era as well. When Huge-Boss' merciless attacks against humanity leaves nearly all of nature completely destroyed and animal life on the brink of extinction, Orsa & Mayoru had vowed to personally save them upon sight and set forth on destroying Huge-Boss so that they'll be able to help restore both nature and animal life back to normal in no time at all.