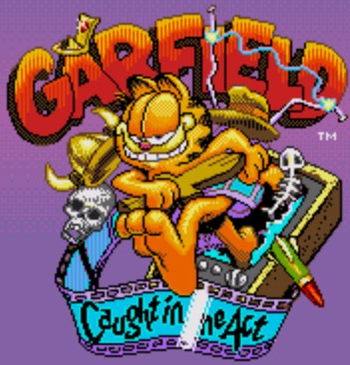 Garfield as he appears on the main menu.
Garfield: Caught in the Act is a Platform Game was released by Sega in 1995 for the Sega Genesis to cash in on the success of Jim Davis's comic strip, Garfield. The sprites were hand-drawn by Davis and his group of artists. Which is quite impressive considering the hardware of the Genesis.
Advertisement:

Backstory: Odie sneaks up and scares Garfield while he is watching television, causing him to break it. They work together to fix it before they face the wrath of Jon. What is left is definitely NOT a television. Garfield throws away the 'spare parts' that were left upon completion. These parts come to life, becoming The Glitch, which throws Garfield into the world of television. Each level is a different TV genre. Collecting TV remote pieces lead you to win the game.