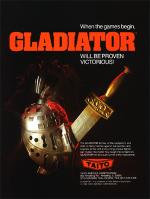 Gladiator, also known as Great Gurianos or 黄金の城 (Ougon no Shiro, translated as Castle of Gold), is a 1986 Beat 'em Up Arcade Game. It was developed by Allumer, Ltd. and published by Taito.
Advertisement:

Playing as a knight or gladiator named Great Guaranos/Guiranos, you plod through four stages on a quest for treasure. Of course, you'll have to go through a lot of traps and guardians before you can get it!

The game has a 1992 sequel titled Blandia.

Should not be confused with the film Gladiator, even if it features gladiator fights. Or the Taiwanese video game, The Gladiator.