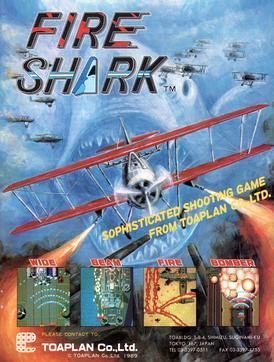 Fire Shark, known in Japan as Same! Same! Same! (鮫！鮫！鮫！, lit. "Shark! Shark! Shark!"), is a 1989 Shoot 'em Up arcade game developed and published by Toaplan and considered the sequel to their earlier arcade title Sky Shark / Flying Shark. The player controls a biplane and builds up a score by shooting a variety of military targets.

In the year 19X9, on an alternate Earth, a global super-power known as the S Corps, which specializes in a heavy industrial army, begins invading various countries. All seems lost when a phantom pilot flying a super-powered biplane called the Tiger Shark flies in to save the world from domination.

Fire Shark shares quite a few similarities to Raiden, though it came out one year earlier. It's been suggested that this inspired Raiden.

The original version of the game only allows one player at a time, with 2-player mode being the taking-turns style of multiplayer. The international Fire Shark version of the game introduces simultaneous 2-player play and removes the checkpoint system, respawning the player in place even in a 1-player game. This version of the game would then serve as the basis for what is called the "2P" build of Same! Same! Same!, which has further balancing changes to reduce the difficulty.

A Sega Genesis port was released in 1990 in Japan and 1991 for overseas markets. A Sharp X68000 version was developed but then cancelled.

In 2022, M2 released Hishou Same! Same! Same! for Nintendo Switch and PlayStation 4. It is a Compilation Rerelease of Fire Shark and Sky Shark, as part of the Toaplan Arcade Garage series, itself part of the M2 ShotTriggers lineup. It includes the arcade versions of both games, including their regional variants and the "2P" build of Same! Same! Same as part of the base digital version; the DLC includes the NES version of Sky Sharknote notable for being made by a North American team and released exclusively in NA prior to this compilation, the NA Genesis and JP Mega Drive versions of Fire Shark, and Wardner as the bonus non-shmup game in its arcade and Famicom Disk System forms. Those who purchase the physical edition get all of those titles; for those who buy the digital versions, the base game comes with the arcade versions of Sky Shark and Fire Shark, with the rest of the titles as paid DLC. In addition, purchase of the game also comes with a complimentary download of Teki Paki.