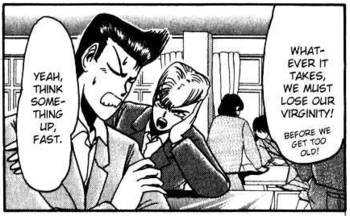 Spoiler One of them still hasn't succeeded by the end of the series.
"We use a most unfortunate idiom when we say, of a lustful man prowling the streets, that he 'wants a woman.' Strictly speaking, a woman is just what he does not want. He wants a pleasure for which a woman happens to be the necessary piece of apparatus. How much he cares about the woman as such may be gauged by his attitude to her five minutes after fruition—one does not keep the carton after one has smoked the cigarettes."
— C. S. Lewis, The Four Loves
Advertisement:

Sometimes, a man really has to get it on. So much, in fact, that it's totally worth spending an obscene amount of time and money if the end result is getting laid. If the primary plot of a work of fiction is an examination of this time and money we have a Quest for Sex.

The reasons for a man's quest can vary to a fairly wide extent—he might just be out to use Sex as Rite-of-Passage to get accepted among the Fratbros. Other times the man isn't a virgin—he just really, really wants it very badly. Sometimes to the point of needing to commit adultery in order to get it. Because, let's face it—he's a dude. What's he supposed to do about it?

This plot trope has been common over time as laxity from the Moral Guardians has made sex comedies centered on this premise easier to distribute. Still, expect many examples to eventually feature an Aesop about sex not being everything at the end, if only because building a character's entire motivation around getting laid often ends up seeming, kind of, you know, shallow and pathetic.

Popular in the Sex Comedy.