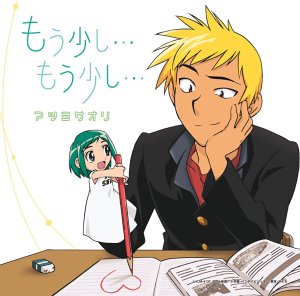 That's not a hand puppet, folks.
Why does my hand have breasts on it?!
Advertisement:

Midori Days is a manga series by Kazurou Inoue. It was serialized in Weekly Shōnen Sunday from September 2002 to July 2004. An anime adaptation by Studio Pierrot aired from April to June 2004.

Seiji Sawamura is a high school delinquent — a rude, disrespectful punk with a "bad dude" air and a skill for fighting that can lay out entire gangs with his "devil's right hand". But underneath his tough guy exterior is a noble soul who won't hesitate to defend an underdog. He's also lonely and unlucky in love. His reputation is so frightening that no girl he knows, other than his 10-year-old neighbor Shiori Tsukishima, wants his attention or to be seen with him.

This state of affairs grates on him — failure after failure weighs on Seiji's mind, until one day, alone at home, he bemoans the fact that he seems destined to live his life with only his right hand as his lover, and swears that he will accept any girl who will have him. When a strange girl's voice echoes "Really?" in the empty room, he is understandably surprised and confused — but it's nothing on how he feels a few moments later when he discovers that his right hand has turned into a miniature teenaged girl named Midori Kasugano. He really should have picked a better choice of words...

Midori, it turns out, was a perfectly normal girl from another school who idolized Seiji from afar. How she turned into his hand neither knows, but she's happy with the situation even if Seiji isn't.