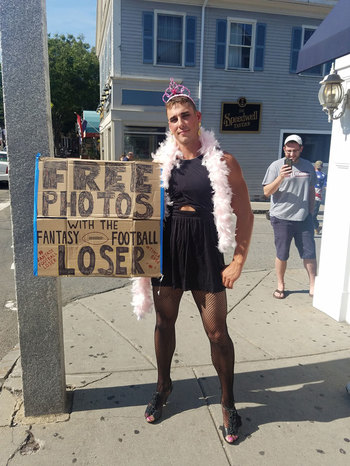 "Each of the two contestants would then concentrate their will on the bottle and attempt to tip it and pour spirit into the glass of his opponent, who would then have to drink it.
The bottle would then be refilled. The game would be played again. And again.
Once you started to lose you would probably keep losing, because one of the effects of Janx Spirit is to depress telepsychic power.
As soon as a predetermined quality had been consumed, the final loser would have to perform a forfeit, which was usually obscenely biological.
Ford Prefect usually played to lose."
— The Hitchhiker's Guide to the Galaxy
Advertisement:

Some bets are for money or material possessions. Other times, it's a person's dignity that's on the line.

Sometimes called a "penalty game" or "batsu (punishment) game" in Japanese media, this trope is when two or more characters make a bet where the loser must do or be subjected to something humiliating. Common penalties involve crossdressing, undressing (because Naked People Are Funny and/or Fanservice) silly dances, shaved heads, eating disgusting things, or could go all the way up to becoming the winner's Wager Slave.

This can be used as an example of the wacky hijinks of a group of friends. Or for this trope's darker side, it can be used to characterize an antagonist as someone who's not satisfied with simply defeating his opponents. This guy wants to utterly humiliate them. This can also set the villain up to be Hoist by His Own Petard and get himself subjected to the humiliating fate he wished upon the heroes.

Super-Trope of Wager Slave, where the Humiliating Wager is a period of servitude, and Strip Poker, where players place bets of their own clothing. Compare Lost Him in a Card Game, where the wager is someone else's servitude. Compare The Bet.