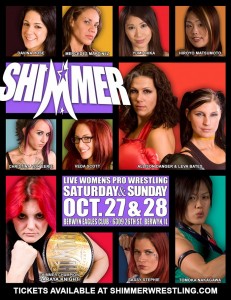 "Without a doubt, a case could be made that the first shots of the 2015 WWE Women's Revolution were actually fired at the Berwyn Eagles Club a decade before."
— Pat Laprade and Dan Murphy, Sisterhood of the Squared Circle: The History and Rise of Women's Wrestling
Advertisement:

Shimmer Women Athletes, mostly known simply as SHIMMER, is an all-women's independent wrestling promotion based in Berwyn, Illinois, established in 2005 and run by commentator Dave Prazak and wrestler Allison Danger.

SHIMMER describes itself as "American Joshi", and was founded as a platform for serious, pure-sport women's wrestling. At the time, it was known as an alternative from the sex appeal of WWE's Diva division, as well as the camp nature of other women-focused promotions.

SHIMMER had close ties to Ring of Honor. The SHIMMER Singles Champion's title was recognized as The ROH Women's Title and was defended on ROH shows, while the ROH Dojo was also considered the SHIMMER Academy. Ring of Honor's purchase by the Sinclair Broadcast Group has cut back on this relationship. SHIMMER also has a sister promotion in Florida called SHINE Wrestling

, which was closely intertwined for its first 10 shows, but mostly disconnected by its 17th.

SHIMMER started as a DVD-only company, but fans have always been allowed to attend tapings. Occasional Internet Pay-Per-Views (iPPV) started with its 53rd Volume during a WrestleCon. Most of them can be viewed on WWN Live, while individual matches became available for purchase through ClickWrestle. In November 2018, SHIMMER launched their own streaming platform in http://StreamSHIMMER.com

Several SHIMMER wrestlers have gone on to wrestle for the major promotions.

Neither SHIMMER nor SHINE have any connection with the Nickelodeon preschool series Shimmer and Shine.