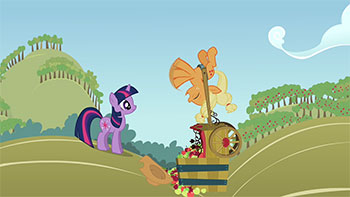 Who's a silly pony?

Applejack: This is your sister Applejack, remember? The loyalest of friends and most dependable of ponies?
Big Macintosh: But still only one pony, and one pony plus hundreds of apple trees just doesn't add up to...
Applejack: Don't you use your fancy mathematics to muddy the issue!
Written by Amy Keating Rogers
Advertisement:

It's harvest time (a.k.a. "Applebuck Season") at Sweet Apple Acres. Unfortunately, Big Macintosh has injured his back, leaving Applejack as the only pony available to bring in the harvest. When Big Mac suggests that the job might be more than she can handle, she takes it as a challenge and vows to finish the job by herself... right after she heads off the stampede of panicked cattle heading for town, of course...

The citizens of Ponyville organize a ceremony in appreciation of Applejack. But the guest of honor arrives late, dazed from sleep deprivation and overwork after a week in the fields. A concerned Twilight Sparkle offers her help, but Applejack is determined not to break her word and stubbornly refuses.

Twilight is right to be worried. As her friend struggles to keep her commitments and bring in the apple harvest, things quickly get out of hand. Applejack launches Rainbow Dash into Golden Oak Library when a stunt goes wrong, botches Pinkie Pie's muffin recipe so badly that the baked goods — er, "baked bads" — give half the town food poisoning, and frightens Fluttershy's newborn rabbits into stampeding through the center of Ponyville. Through it all, an increasingly frustrated Twilight tries to convince Applejack that she needs help:

Applejack remains as stubborn as ever... up until she thinks she's finished, only for Big Macintosh to show up and point out that she's only halfway through. Physically and mentally exhausted, she collapses. Upon regaining consciousness, Applejack finally unbends enough to ask for help, and all the Mane Six pitch in to get the apples harvested on time.

Applejack feels offended when her brother doubts her ability to single-handedly harvest all the apples in her orchard.

Applejack feels offended when her brother doubts her ability to single-handedly harvest all the apples in her orchard.