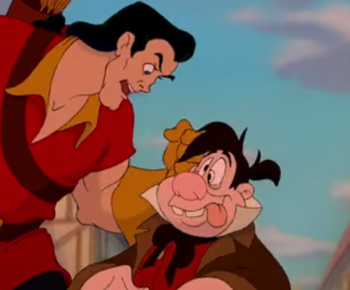 There are many things that make you smile; flowers, sunshine.

Examples of these dire situations include being brainwashed, getting on some kind of drug high (or in a show for all audiences, some kind of high that isn't a drug), being knocked unconscious, etc.

There is some Truth in Television here; people who are drugged do this lazy sort of smile because they are in a relaxed state and therefore can't control their muscles as well as when they were fully conscious.

Related to Concussions Get You High. Compare "Oh, Crap!" Smile. Contrast Go Out with a Smile, where a character smiles out of contentment as he or she dies or is killed. See also Circling Birdies when cartoon symbols fly around the head of an injured or drugged character. This may also be doubled with a Non Sequitur, *Thud*. Can result from Alcohol-Induced Idiocy, Intoxication Ensues, and being Drunk on Milk. Super-Trope to Laughing Gas.