Smack on the Back 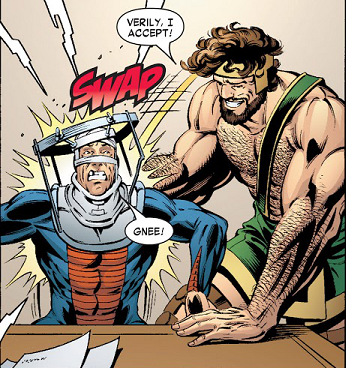 A character wants to congratulate another, and slaps him on the back. However, due to his size, powers, or occasionally the recipient's injuries, he uses a little too much force, causing the recipient to wince, fall down, etc.

While it's most commonly a slap on the back, it can be applied to any friendly gesture done with too much force.

A variant is when the slap wouldn't be all that painful if the recipient didn't have a sunburned back or other injury.

If the slapper is not so friendly, be wary of a possible "Kick Me" Prank.

Related to Does Not Know His Own Strength, although superhuman strength is not required. A staple of the Boisterous Bruiser and The Big Guy. See also Crushing Handshake and Bear Hug.