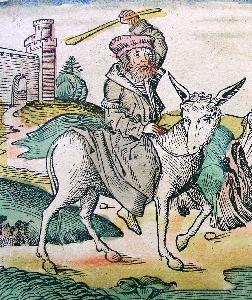 And Balaam calls me an ass...
"In order to get the animal's attention, first rap it between the ears with a stout stick."
— A U.S. Army manual on dealing with mules
Advertisement:

It's a common stereotype for mules, as well as for their donkey sires, to be stubborn, recalcitrant, and uncooperative animals. This typically applies in the context of trying to use them as beasts of burden, with the animal in question stubbornly refusing to pull its cart or haul its load and firmly planting itself in its spot. If it will be convinced to move at all, it will only be by dint of much pulling, pushing, and cursing, and most likely after some judicious application of goads or stout sticks. Less commonly, the mule or donkey will be used as a steed instead, typically on a path too harsh for horses, and at an arbitrary point in the path suddenly refuse to move any further.

Sometimes the ass is used as a symbol not so much of stubbornness, as of sheer stupidity. It was probably this characterization that led to the modern usage of "ass" to mean "fool". On still other occasions the donkey is used to depict low status or servility, especially when contrasted with more favored beasts such as the horse or the hound. Finally, paradoxically, the mule has been used to symbolize sturdy, if stubborn, practicality, and a no-nonsense attitude towards the harsher realities of life.

Both these characterizations (ironically) come from the fact that donkeys and mules are more intelligent than horses and have a stronger sense of self-preservation. This makes them less obedient to humans, and therefore we perceive them as stubborn, but consider: you can ride a horse to death, but a donkey will stop when it's exhausted. Which is smarter?

Note that strictly speaking, a donkey (or ass, of which a "jackass" is the male and a "jenny" the female) is a separate species; a mule is a (usually) sterile hybrid, a cross between a male donkey and a female horse, as opposed to a hinny, the offspring of a male horse and a female donkey.

Despite the name, this trope is equally applicable to full-blooded donkeys as it is to mules. More rarely, hinnies — the other horse/donkey hybrid; mules have a horse mother and donkey father, while hinnies are the other way around — may be depicted this way as well. Compare Moody Mount (which is for rideable animals other than donkeys and mules being troublesome). It can go with Diligent Draft Animal when donkeys and mules are used for physical labor and pulling loads.