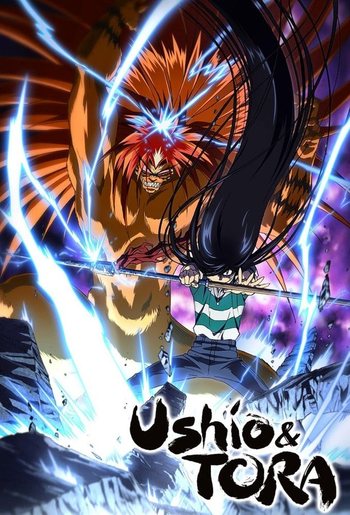 Ordinary Middle School Student Ushio is sent to clean up around the shrine that his father is the caretaker of. Stumbling through an ancient doorway, he finds himself face to face with a vicious, demonic monster with tiger stripes - a youkai, pinned to the stone wall by an old spear.
Advertisement:

The youkai's evil aura attracts minor yokai to converge on the shrine, and Ushio makes the decision to free the tiger youkai who promises to clean up the mess. However, the tiger youkai merely attacks Ushio and gloats that it is free to devour humans once more. Outraged at the betrayal, Ushio unexpectedly channels the Beast Spear's awesome power and cows the fearful tiger youkai into helping destroy the minor youkai using its formidable strength and lightning bolts.

After this unusual introduction, Ushio decides to keep the tiger youkai close by in order to prevent it from killing and eating other humans, to its chagrin naming it Tora (Japanese for tiger). Tora, meanwhile, sticks around in order to find a chance to eat its tormentor.

However, the act of removing the Beast Spear leads to a chain of events, ultimately drawing back to an ancient prophecy and an old and implacable enemy who has the power to destroy all Japan - human and youkai alike. As Ushio and Tora face off against a variety of youkai based mostly on Japanese traditional legends, they grow closer until they reach a perpetual Enemy Mine / Heterosexual Life-Partners state.

Ushio and Tora / うしおととら is a manga by Kazuhiro Fujita, famous for its portrayal of classic Japanese monsters in a modern setting such as the Kamaitachi and Kappa (as well as having the heroes kick monster butt) and the interplay between the two leads. The manga originally ran in Weekly Shonen Sunday from 1990 to 1996, and was adapted to a short 10-episode OVA from 1992 to 1993. Ushio and friends appear in the Massive Multiplayer Crossover game, Sunday VS Magazine: Shuuketsu! Choujou Daikessen.

An anime adaptation helmed by Trigun director Satoshi Nishimura and animated by MAPPA aired in 2015 and 2016 for 39 episodes.

Ushio and Tora provides examples of: