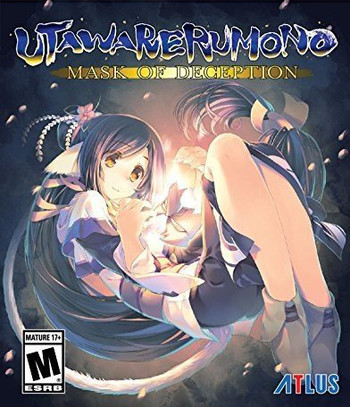 Utawarerumono: Mask of Deception (or Itsuwari no Kamen in Japanese) is a visual novel by Aquaplus released in 2015 for the Vita, PS3, and PS4. It is a sequel and follow-up to the original series. The story begins when a young man wearing a hospital gown awakens in the middle of nowhere, finding himself walking in the snow. He is attacked by a giant insect, which is devoured by a red slime before escaping with a young girl with animal ears and a tail named Kuon. She declares herself his guardian because she saved his life and returns with him to her village, where she finds that while he's physically quite weak and very lazy, he's also smart enough to fix the water wheel in minutes despite never having seen one before.

From there begins a tale of a man out of time adjusting to this brave new world.

An anime adaptation by White Fox began airing at almost the same time as the game's release. A Western localization of the game by Atlus was released on May 23, 2017, and a sequel by the name of Utawarerumono: Mask of Truth was released on September 21, 2016.

Additionally, a Hack and Slash adaptation of this game named Utawarerumono: ZAN was also released on September 27th 2018, hitting the west on September 10th 2019 thanks to NIS America.